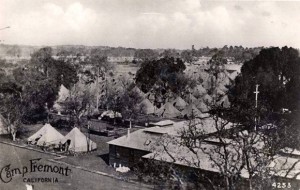 Siberia and California: Connections during the Russian Revolution and Civil War

Late in 1917 (25 October according to the Old Style calendar, 7 November according to the New Style), shortly after the US entered World War I and began sending troops to France on the side of the Allies, Bolsheviks stormed the Winter Palace in Petrograd and the Kerensky “provisional government” fell. So began the Russian Revolution. By May 1918 civil war broke out, with the newly formed Red Army and the “White Army” engaged in attack and counter attack in several regions, including Siberia. The war continued in some parts of Siberia into 1922.

California figures in part of this history. The majority of troops that formed the American Expeditionary Force–Siberia (in Russia from September 1918 to April 1920) were trained at Camp Fremont, located in Menlo Park.  Many of the participants of the White forces and refugees leaving Russia via Siberia settled in California in the 1920s and 1930s. (So did some of the Americans after their sojourn in the AEF.)

The Institute for Historical Study and the Merced Branch of the San Francisco Public Library are hosting an evening of four presentations by independent scholars: “The Russian Civil War — A Quick Overview,” “Civil War-Related Collections at the Hoover Institution Archives and the Museum of Russian Culture,” “The Russian Civil War through the Camera of a Young Officer,” and “The Refugee Experience through Siberia.”  Images from local archives and private collections will illustrate the talks. The speakers are Richard Robbins, professor emeritus, and Maria Sakovich from the Institute; Yves Franquien from the Museum of Russian Culture and Hoover Institute Archives; and Lada Tremsina, author of three books on the civil war.

Sunday, August 16, 2:00 pm, Public Program: Elizabeth Pepin Silva will discuss the glory and destruction of San Francisco's Fillmore District of the mid-20th century, Harlem of the West: The Fillmore Jazz Era and Redevelopment.  Ms. Silva is a documentary filmmaker, photographer, writer, and former day manager of the historic Fillmore Auditorium. She grew up all around the Bay Area and earned a bachelor's degree in journalism at San Francisco State University. Elizabeth was a staff producer at KQED-TV, where most recently she was series producer of "Truly CA," featuring documentaries about the Golden State. She wrote the book Harlem of the West -- the San Francisco Fillmore Jazz Era. A winner of film-festival awards and five Emmys, she lives in Ventura County. Please register soon via the event ticking site Eventbrite. Registration is free. The capacity of the Zoom meeting is limited, and 1,400 people who signed up for a San Francisco Public Library presentation by Ms. Silva had to be turned away. Public programs have included panel discussions, individual presentations, and film series. Programs are co-sponsored with other institutions, including public libraries, universities, museums, and archives. Read More...

Sunday, September 20, 2:00 pm, Black History in Marin County: From the Spaniards to the Great Migration IHS member Marilyn Geary will present unique stories of Black individuals who made their marks amid the biases of a predominantly white society. Please join us via Zoom:  https://us02web.zoom.us/j/85868409468  Marilyn L. Geary is an oral historian, writer, and filmmaker. She is the author of Marin City Memories, based on the oral histories of African-Americans who migrated from the South to work in the Sausalito shipyards during World War II. Marilyn's community oral-history projects include  The Faces of Marin City; the film Marin Mind/Scapes: Stories of Art, Nature and Healing; and The Madonna del Lume/Blessing of the San Francisco Fishing Fleet, a Local Legacy project of the Library of Congress.  Her writings have appeared in Turning Memories into Memoirs, The Oral History Review, the West Marin Review, and elsewhere. Marilyn is writing a nonfiction account of the lives of three Swiss-Italian brothers who immigrated to California and Australia in the mid-19th century.