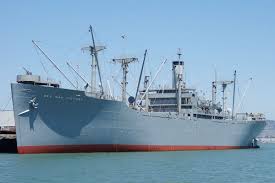 On July 26 a dozen or so Institute members and friends visited aboard the SS Red Oak Victory ship moored in Richmond (an exhibition of the Richmond Museum of History). This Victory ship, built in 1944 at the Kaiser Shipyards, was one of ten built for the Navy. (Compared to the Liberty ship, the Victory was faster, longer, and with a greater cargo capacity.) After World War II the Red Oak was transferred out of the Navy. Although in the Reserve Fleet (i.e. in “mothballs”) on three different occasions, the Red Oak saw duty during the Korean and Vietnam wars. The ship was retired again to the Reserve Fleet in Suisun Bay. In the 1990s as ships were being moved out of the mothball fleet and shipped to China for scrap, a campaign began to save her as an historic ship, the only Kaiser-built ship remaining.

For fifteen years, work has been taking place to restore and make the Red Oak operational, as is the SS Jeremiah O’Brien, one of two Liberty ships remaining. Her two lives as an armed auxiliary Navy ship and as a merchant ship are being preserved as much as possible. It is a challenge. The aim is to show enough of the armament to show the ship’s Navy heritage, but without installing all the 20mm anti-aircraft guns that were carried. “We do have the forward 3″ gun, and hope to acquire a proper 5″ gun for the aft gun tub” our docent told us. “There is a 5″ gun stowed in the hold, but it has the wrong type of mount, designed for a shore installation.” Finding funding is a constant challenge. For example, the Navy has offered guns which are free, but money needs to be raised to pay for their transportation.

We then enjoyed lunch before visiting the Home Front Museum run by the National Park Service. The museum highlights the transformation of Richmond from a small town (24,000) to a boom-town (100,000) of shipyard construction and other war-time production. Among Henry Kaiser’s visionary solutions to the problems of this very large work force was the creation of an employee health plan and childcare facilities for one-year-olds and up. The museum had interactive exhibits that appealed to all ages. The highlight was hearing 93-year-old park ranger Betty Soskin speak of her experiences working in the shipyards and how the war shaped the Civil Rights movement in the 1950s and beyond.

In the abundance of caution recommended by heath authorities, the group has decided to cancel its March meeting. The next time we do meet we will begin reading a 20th century version of a Greek tragedy, Antigone, by the playwright Jean Anouilh.

Sunday, April 12, 1:30 pm,  at the home of Dan Kohanski in San Francisco. Pam Grier will present.

Sunday, March 15,  CANCELLED due to the current health crisis Monika Trobits had been scheduled to present: Exploring an Urban Legend: San Francisco 1923

Welcome to our newest members: Elise Ackerman, Kevin Knauss, Pam Peirce, and Anne Schnoebelen. Learn about them under Member Profiles.

Taryn Edwards has an article in the latest Argonaut (Journal of the San Francisco Historical Society) on “Before the Midwinter Fair: The Mechanics’ Institute’s ‘Pacific Rim’ Industrial Exhibitions of 1869 and 1871."

In October Peter Stansky and his co-author Fred Leventhal are publishing with the Oxford University Press Leonard Woolf: Bloomsbury Socialist. In April, Peter published an “Afterword” to Elisabeth de Waal’s Milton Place (Persephone Books), a novel written shortly after the war but hitherto unpublished. “It came to light through a meeting I had with her grandson, Edmund de Waal, author of the highly regarded memoir, The Hare with Amber Eyes.”

Christopher L. Webber has just published Christian Psalms for Worship and Prayer. “The
traditional psalms written between two and three thousand years ago are an irreplaceable treasure,” Christopher writes, “but they can create problems for modern users. They come from an age unimaginably different from ours and take for granted patterns of life unfamiliar to most of us. To supplement, not replace, these psalms, I have taken passages from the writings of some of the greatest Christian teachers of every era, for example, St. Augustine, Julian of Norwich, Dorothy Day, Mother Teresa, and restructured them in the poetic style of the Biblical psalms which rhyme ideas, rather than sounds, to provide texts that can be used either in formal worship or in private meditation.”

In May, as part of the series of talks for the Supporters of the Museum of Russian Culture, Maria Sakovich presented “Russian Choral Music in San Francisco in the 1920s and 1930s: Cultural Riches and Cultural Sharing.” She was very pleased to have Rob Robbins in the audience. In the June 22 issue of Russian Life her talk from last year in the same series was published with photos: “Last Steps of a Long Journey – First Steps of a New Life” (part of a panel presentation about the USAT Merritt’s 1923 Russian refugee-emigrant passengers). Anatol Smelov kindly translated the article from English to Russian.

Ann Harlow wrote an article about the history of Berkeley’s City Hall for the Berkeley Historical Society newsletter and is working with a group on a self-guided history walking tour of Solano Avenue. She recently attended the Conference of California Historical Societies in Placerville, as did Peter Meyerhof.

Jody/Judith Offer writes that she is “enjoying readings and some sales of her new
‘soon-to-become-history’ chapbook, The Grating of America, about the disastrous consequences of our current administration and some of the people fighting it. Copies are available at several bookstores in Oakland and Berkeley and online. If you have any ideas for bookstores, clubs, or churches/synagogues that might schedule a reading, please contact me."

Congratulations to Our 2018 Mini-Grant Recipients:

Jim Gasperini, for editing and other expenses in preparation of a book manuscript with the working title Fire in the Mind: How We Imagined the Non-Living Relative that Gave Us Control of the World.
Richard Hurley, to revise and reprint panels of a traveling exhibit, California in the Civil War.
Joe Miller, for research, editing and illustrations for an article, “Wild Women Suffragists and the Sex Scandals that Almost Sank the Movement.”